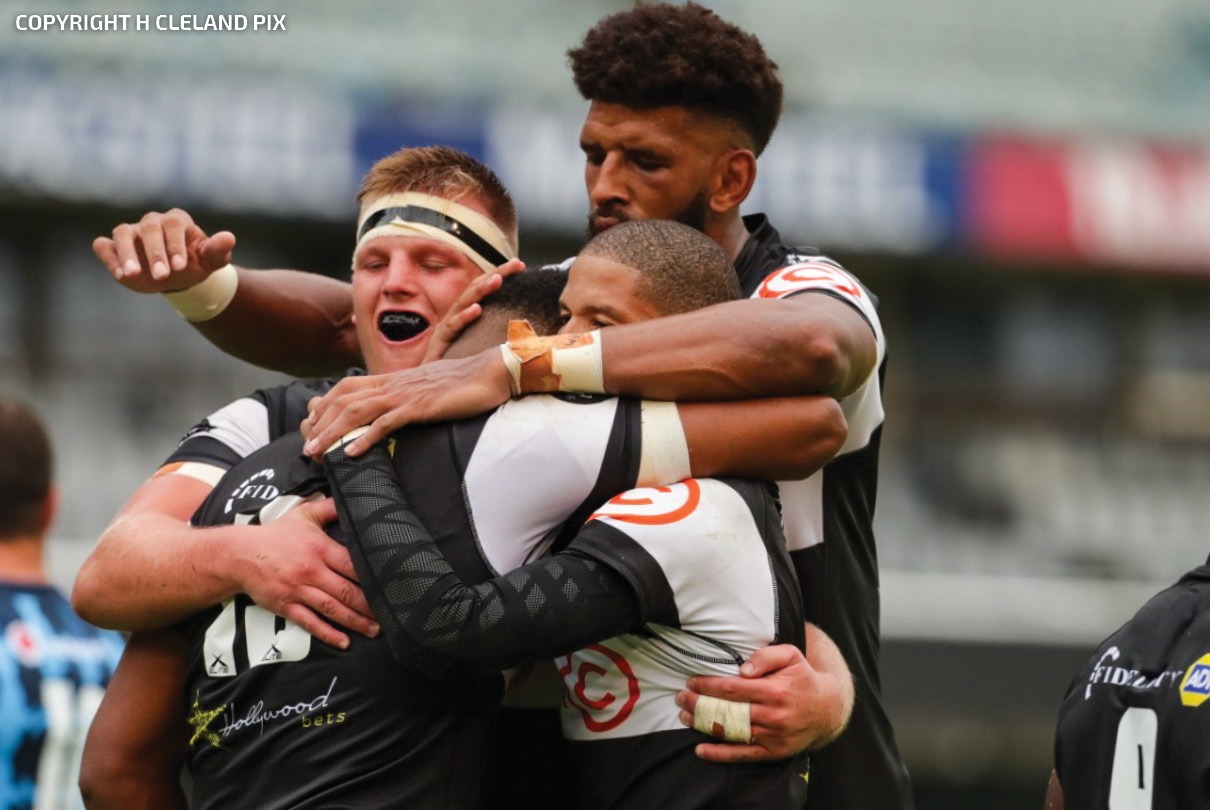 The Cell C Sharks had to dig deep against the marauding Vodacom Blue Bulls in a tense and physical Carling Currie Cup top of the table clash at Jonsson Kings Park before emerging 32-29 victors.

The home side showed composure and enterprising play in a game of to-and-fro before the visitors found a degree of continuity in the second half to pull ahead, only for the Cell C Sharks to finish strongly enough to secure a win that puts them into second spot with a game in hand on the log leaders.

The expected forward tussle in the match was evident from the start and although an earlier Bulls’ maul went backwards, the following drive grew in momentum to earn a penalty, although Morne Steyn pushed the fifth minute effort wide.

The Bulls’ flyhalf was on point a few minutes later when a penalty at the tackle allowed the visitors to get the scoreboard started. But Curwin Bosch cancelled it out with a well-taken penalty from out wide following the most exciting passage of play in the game that was stopped with a high tackle.

A couple of minutes later he doubled his score with a 60m effort inside his own half after Lukhanyo Am had won a penalty on the ground after Sbu Nkosi had smashed his opponent in the tackle.

In a battle of the goal-kickers, Steyn converted his second to level matters with the game approaching the end of the first quarter. The other battle – between the forwards – was playing out an interesting aside as The Cell C Sharks managed to disrupt their opponents’ driving maul to earn a scrum, the first of the game in the 23rd minute and then earned a penalty at the put-in, a significant victory at the set-piece.

Bosch kicked his third penalty, another long range effort he sent perfectly through the middle of the posts for a 9-6 lead with just under 15 minutes of the first half remaining.

Manie Libbok, playing his best game for his new team, perhaps looking to show his previous team what they’re missing out on, showed explosive pace in an attack from the halfway line that came from nothing but he was able to get a pass under pressure to Lukhanyo Am who found himself in enough space to race to the line for the first try of the game for a valuable eight point lead.

The visitors had a number of opportunities late in the half to score, but despite their best efforts, could not broach the heroics of the Cell C Sharks on defence. Eventually, Duane Vermeulen pointed at the posts in resignation at his team’s inability to score their first try.

There was drama in the closing minutes when the referee was happy with a Daniel Jooste try, but he referred it to the TMO who ruled an infringement and so the Cell C Sharks were unable to add to their 14-9 lead as the teams headed for the changerooms.

The second half started off on a positive note for the Cell C Sharks, pressuring the Bulls into making mistakes, forcing a skewed clearance kick, poaching their lineout and then earning a scrum penalty which allowed Bosch to kick his team into an eight point lead early on.

With just over half an hour of the game remaining, the Bulls worked their way into the danger zone and after numerous efforts were repelled, finally managed to score. Steyn converted to reduce the deficit to just one point.

The Bulls retook the lead when the Cell C Sharks were penalised on defence and Steyn sent his team into a 19-17 lead with 25 minutes remaining. The momentum had completely changed into the Bulls’ favour at this point and the visitors managed to secure another penalty minutes later, Steyn taking the Bulls into a five point lead.

Dylan Richardson earned a penalty right from the kick-off, successfully competing for the ball on the ground and Bosch cut the lead to two with a great strike from out wide, the Bulls enjoying a slender 22-20 lead with 20 minutes remaining.

But the Bulls weren’t finished yet, some good pressure built off the back of strong momentum saw them thrusting through the defence for a second try, the conversion taking them 29-20 ahead.

But the topsy-turvy nature of this physical clash continued as a determined effort from the Cell C Sharks was initially stopped short of the tryline, but the penalty was kicked to touch and then Kerron van Vuuren was the man in possession as the ball was driven over. The conversion struck the upright, making it a four point game with 13 minutes remaining.

The Cell C Sharks took the lead with just a handful of minutes left, the forwards smashing the ball up against some resolute defences, showing great patience, before Bosch sent a pinpoint cross to Yaw Penxe who went over without pressure. Bosch converted and it was a three point game, the lead 32-29 with three minutes remaining.

There was high drama in the last play of the game, the final scrum reset numerous times before the Bulls managed to win a penalty and Steyn opted for the draw rather than the win. However, his nerves failed him and he hooked the ball to hand the Cell C Sharks the win.