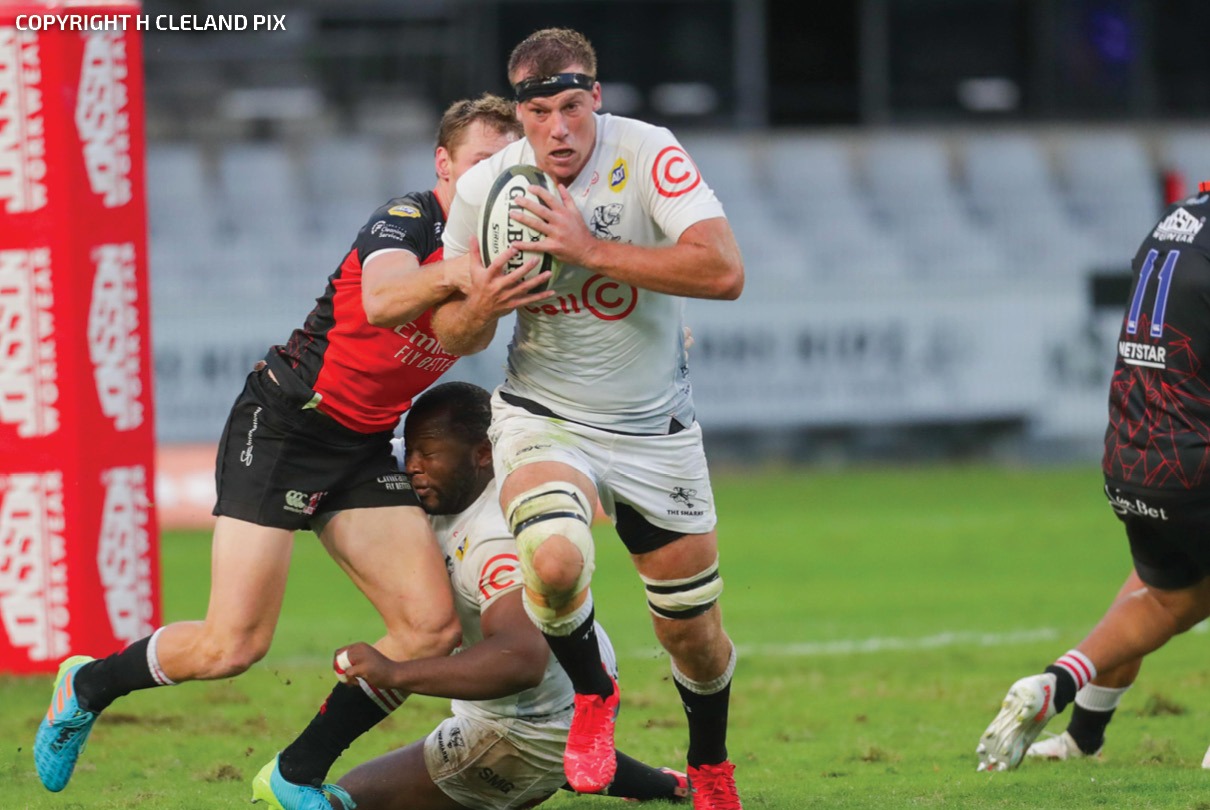 Cell C Sharks head coach Sean Everitt credited the ‘three Es’ behind his team’s victory over the Emirates Lions at Jonsson Kings Park in their second round Rainbow Cup SA clash, their effort, enthusiasm and energy.

“There were some highs and lows, at times the guys were really good and we played some entertaining rugby which is what we want to do,” he said after the match. “The disappointing side was the number of penalties that we gave away. We gave away 15 last week and this week it was 18 penalties and three yellow cards.

“So we’re not happy about that, it’s what put us under the pump and we couldn’t build momentum on the scoreboard. It’s a continuous work-on for us and it’s something we need to address before we go up to Pretoria this weekend.”

Finishing the weekend on top of the log with two bonus point victories suggests that even when the team is not playing at its best, they are still capable of achieving great results. Frustrations aside, Everitt was still very pleased with the effort from his charges.

“Conceding 18 penalties is not a great way to play 80 minutes of rugby, but at the end of the day we must look at the positives. The guys are trying really hard to put phases together on attack.

“When we were down to 13 men, I thought the team showed amazing character by holding the Lions out. We were one short at the scrum but the guys were amazing. Wiehahn Herbst came on for Thomas du Toit and I thought he did very well not conceding a scrum penalty when it was seven against eight.

“I must also mention the maul stoppages, the guys were outstanding in that department although we are getting a lot of practice there. The guys have been really good at that. I thought our defence was outstanding, we created turnover opportunities and at the end of the day it was a better performance than last week [against the DHL Stormers].”

Talking about improvements, the Cell C Sharks lineout did struggle to a degree in the opening match of the tournament, but were exceptional against the Lions. The set-piece in general took a huge step up.

“They were a lot better,” Everitt admitted. “In the first 20 minutes of the first half last week we had lost three lineouts, this week I think we were 100%, so that was really good. I thought our set-pieces were good as well, we earned a couple of scrum penalties there as well.

“There is a lot to be positive about, we came into the competition with a lot of criticism aimed at our set-piece – our scrum as well as our lineout – and it seemed to go really well against the Lions.”

Given that the competition was reduced to home and away matches against fellow South African opposition, the Rainbow Cup SA tournament, by its very nature a short one, means there can be no slipping up or it’s a case of playing catch-up. This is why it is so pleasing for the Cell C Sharks to have gotten their campaign off to victorious start.

“Every weekend is vitally important and that’s why the pressure is on, in a short competition you can’t really afford to drop any points otherwise you’re level-pegging with the next team. To be unbeaten after two games and have maximum points is really pleasing. In the first round we have just one home game so these points we have earned are vitally important going forward.

“But the big test for us will be going up to Loftus to take on the Bulls this coming weekend.”

Given the character shown, Everitt has every belief in their ability.

“This is a team with a lot of fighting spirit, when we defended so well with just 13 men was an example of that. Last week when we were under the pump we were able to come back and win the game.

“We’ve seen over the last 12 months, this is a team that will fight for each other. They play with a lot of effort, enthusiasm and energy and I don’t think their work rate can ever be questioned, although at times perhaps we are a little bit inaccurate or lack a discipline as far as penalties are concerned.