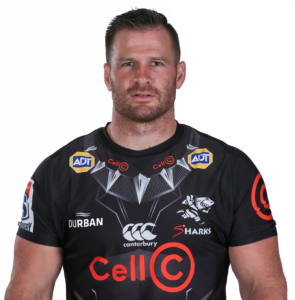 The veteran in the current Cell C Sharks squad, Craig Burden boasts 75 Currie Cup caps and is just two games shy of attaining a half century of Super Rugby appearances for the men in black and white.

Burden was a three-quarter at Maritzburg College but switched to hooker as a senior player and was fast-tracked into the role by attending All Black Murray Mexted’s International Rugby Academy in New Zealand in 2007.

Having made his senior provincial 15 years ago, the 34-year-old also has extensive overseas experience, having represented Toulon, Montpellier and Stade Français in the French Top 14.