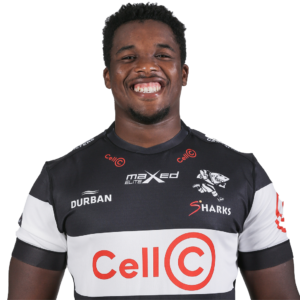 Mbatha was recently invited to a Springbok alignment camp, with a view to the 2021 British & Irish Lions series.

The 21-year-old hooker’s call-up came as no surprise. He was in the Cell C Sharks starting lineup for the Currie Cup final against the Bulls and has since established himself as first-choice hooker for the Rainbow Cup SA tournament.

Mbatha hails from Esikhawini near Empangeni, where he was introduced to rugby at Richardia Primary. Having represented Cell C Sharks Schools in 2016 and 2017, from Maritzburg College, he was South Africa’s frontline hooker at the 2019 World Rugby U20 Championship – having already made his Super Rugby debut earlier that same year at only 19 years of age.