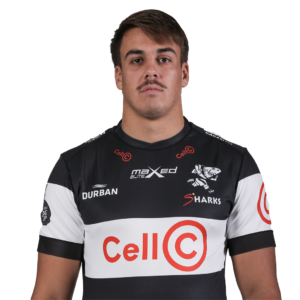 Hailing from Newcastle in Northern KZN, Labuschagne was schooled at Maritzburg College and arrived at The Sharks Academy three years ago with no playing contract.

The young second-rower nevertheless knuckled down hard to make the most of his opportunities – like the spectacular try that he scored, in conjunction with lock colleague JJ van der Mescht, for the Cell C Sharks in the national U19 Championship final in 2018. The KZN youngsters went on to clinch the title with a 40-27 triumph.

Recently, Labuschagne was selected to play for a composite Invitational team against the Cheetahs.