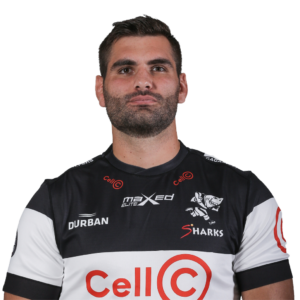 Since swapping the light blue jersey of the Bulls for the black and white of the Cell C Sharks three years ago, Van Heerden has accumulated close on 30 Super Rugby caps for his adopted team and delivered industrious performances week in, week out.

One wouldn’t expect anything less, considering that he was groomed as a lock in Pretoria. The capital has traditionally been renowned as a Bok lock factory; just think Frik du Preez, Moaner van Heerden, Louis Moolman, Victor Matfield and Bakkies Botha, to name a few.

And, now, the rangy Affies old boy is keen to build on the tradition of great Natal Sharks locks, pioneered by the likes of André Botha, Mark Andrews, Albert van den Berg and Johann Muller.