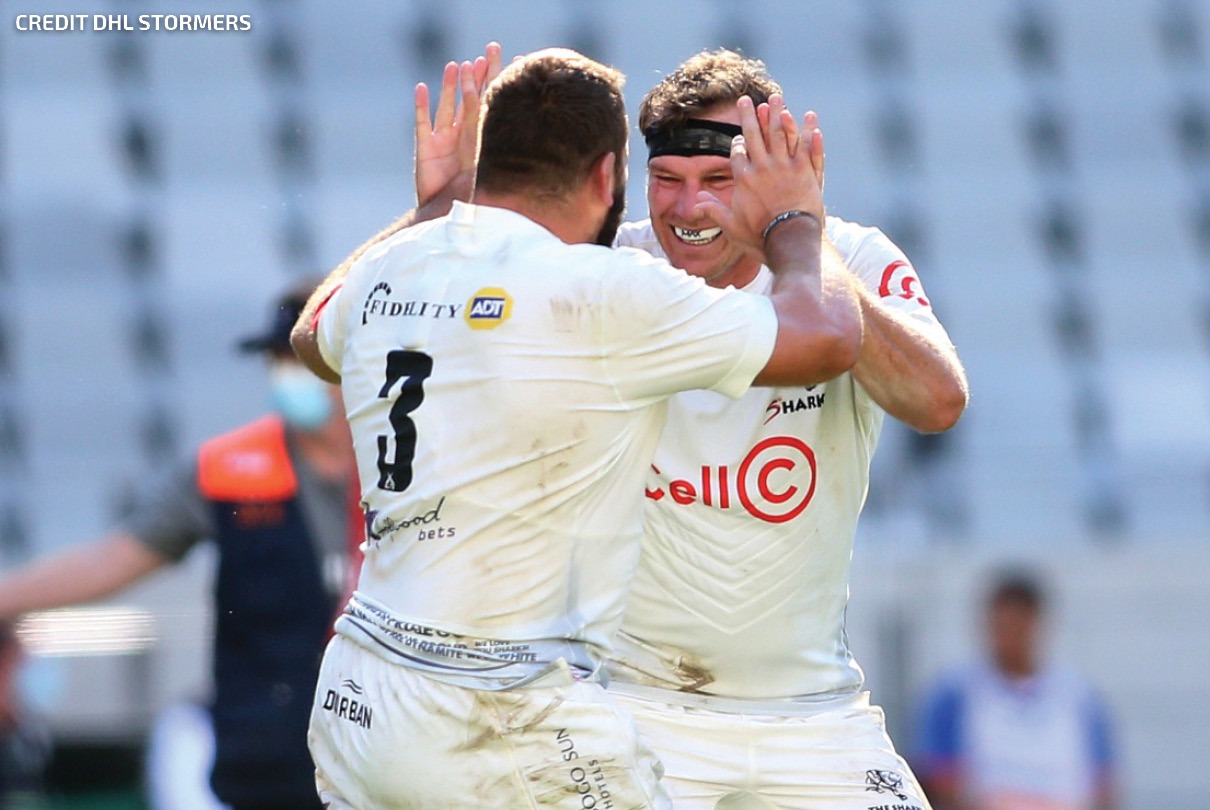 In a highly entertaining and at times hugely tense Rainbow Cup SA match which kicked off the competition on Saturday afternoon, it was the Cell C Sharks who prevailed 33-30 at Cape Town Stadium.

History was on the side of the Cell C Sharks who had won four of the last six encounters between the sides and they made it five from seven with a five try to three, bonus point win in a match that had the Stormers taking a strong early lead, but then indiscipline struck and they were made to pay for their indiscretions.

The Stormers struck first blood with a penalty early in the game and then followed that up with a good passage of play to score the opening try of the game, the conversion giving the home side a 10 point lead.

A handful of minutes later the Stormers benefited from a loose ball off a Sharks counter-attack and were able to turn defence into attack to score a relatively simple second try. The conversion in front was easy enough to add the extras for a 17-nil lead.

Just shy of the 13th minute, the Stormers lost a man to a red card for an extremely dangerous tackle on the hugely impressive Aphelele Fassi who was fortunately to come out of the reckless action relatively unscathed. It could have been so much worse.

The Stormers were reduced to 13 men when they lost their eighthman to a high tackle and from the resultant kick to the corner and lineout maul option, Thomas du Toit closed out the try with Siya Kolisi, on debut for the Cell C Sharks, making the initial drive. Curwin Bosch converted and the deficit was cut to 10 points.

However the Stormers managed to pull back a successful penalty for good competing on the ground in the tackle and then took advantage of a high tackle penalty to add a third with a quarter hour in the half still remaining.

As the game headed for half time, the Stormers were put under pressure and initially managed to defend well, before a perfectly executed training ground movement secured the second try, Sikhumbuzo Notshe moving off the back of the lineout and sending the inside pass to hooker Fez Mbatha who crashed over.

The second half started off in much better fashion for the Cell C Sharks who enjoyed some wonderful continuity and excitement on attack as they worked their way towards the tryline. Smart thinking from Reniel Hugo saw him take the quick tap to score, with Bosch adding the extras.

Referee Jaco Peyper referred an act of foul play from the Stormers eighthman who was again found guilty of a no arms, high tackle to Jeremy Ward and was issued his second yellow which was automatically converted to a red card.

With tails up, the Cell C Sharks were riding a wave of confidence and built up another great head of steam, keeping the ball alive nicely before Hugo received the ball in space and scored his second, Bosch’s conversion from in front handing the Cell C Sharks a 26-23 lead with half an hour remaining.

There was no stopping the visitors as a quick lineout to Grant Williams saw the youngster make oodles of ground with his pace and then who should crop up but that man Hugo to score his hat-trick and push the Cell C Sharks even further ahead, Bosch’s conversion making it 33-23.

It was an object lesson in how confidence can turn a game around as the Cell C Sharks had been under immense pressure, but once they were rewarded, the tries flowed as they scored 26 unanswered points, en-route to a 10 point lead.

With two yellow cards and two reds, the Stormers had certainly paid the price of their indiscipline and had an intercept try overturned for a late tackle on Hugo when the Cell C Sharks were on attack.

With six minutes of the match remaining, the Stormers were finally able to score in the second half, Willemse scoring a crucial try for his side with the game slipping away from them, and with the successful conversion, there were just three points in it and five minutes left.

The Stormers chased the win or draw in the final moments but the bravery of the Cell C Sharks on defence simply cannot be understated as they withstood everything the home side threw at them to get their account off to a winning start.