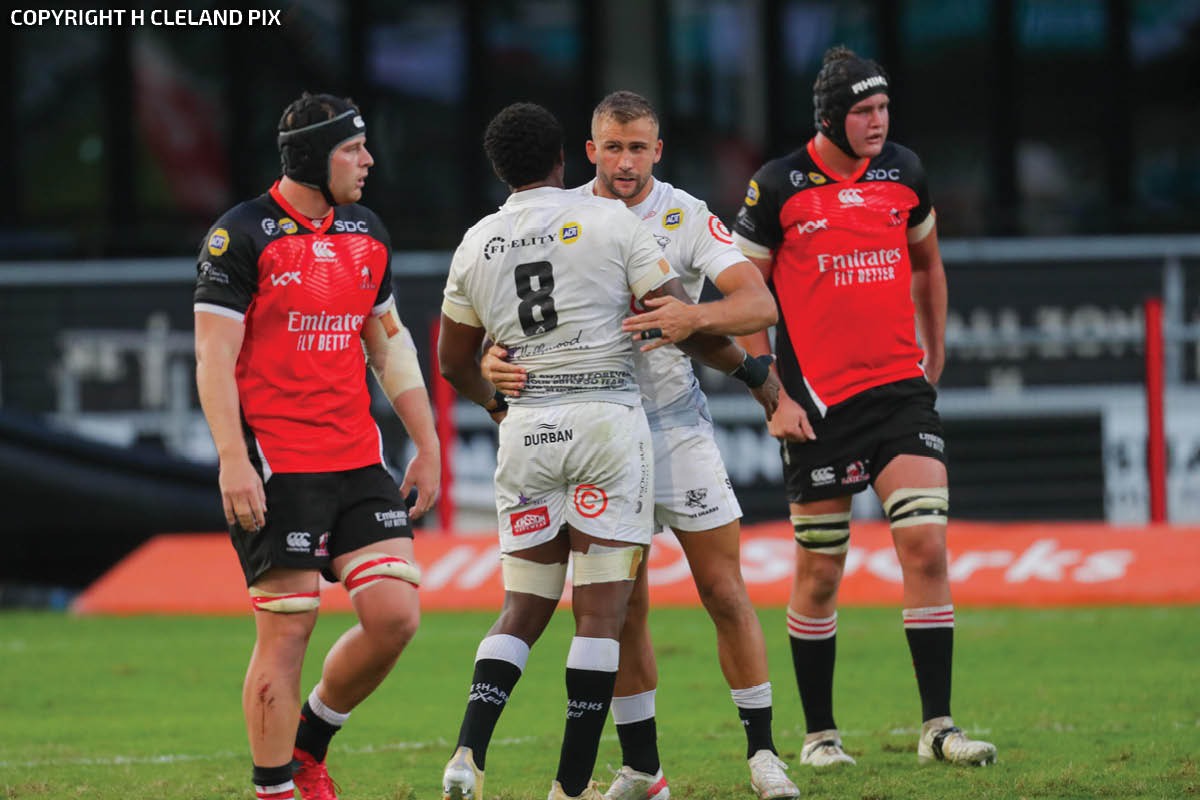 The Cell C Sharks scored their second successive Rainbow Cup bonus point victory while consigning the Lions to a two defeats from two starts record when they won 34-26 at Jonsson Kings Park on Saturday.

Both teams were full of running but it was the pressure exerted by the Cell Sharks that ultimately proved to be the difference.

It was the best possible start from the Cell C Sharks as they scored in the fourth minute of the game with the Lions unable to get out of their 22 as they faced enormous pressure right from the kick-off.

An attacking line-out and drive saw Jeremy Ward put in space and he made no mistake on the outside, with Bosch adding the extras from out wide.

However, the visitors responded almost immediately with a good drive from the lineout to score their first try, although the conversion attempt was wide.

The Lions had done well to hit back given the overwhelming advantage the Cell C Sharks were enjoying in the possession and territory stakes, but they were unable to withstand the sheer pressure being exerted and following on from penalty advantage (twice), Curwin Bosch kicked a clever grubber through which Grant Williams chased and dotted down for the second try, easily converted by Bosch just shy of the end of the first quarter.

With the Lions failing to handle the pressure they were issued a team warning for repeated infringements and finally raised the ire of the referee who issued the yellow card that reduced the visitors to 14 men.

Moments later they were made to pay as initially Sbu Nkosi and then Reniel Hugo made inroads before Thomas du Toit was in support to score the third try under the posts with Bosch adding the two.

Bosch extended the lead to 19 points with a penalty five minutes before the half-time break, but the Lions manage to put together their best passage of play in the whole game as they did well to score their second try, the conversion taking the score to 24-12 in the Cell C Sharks’ favour.

The Cell C Sharks were forced to defend for three minutes of extra time, but did so heroically on their tryline to prevent any further score in the half.

It was the Lions who came out of the half-time break exerting pressure, the Cell C Sharks being issued numerous warnings on defence and then receiving two yellow cards for repeated team infringements within a five minute period.

In spite of the numerical advantage, the Lions failed to make it count and the Cell C Sharks heroically held out the pressure before clearing into the Lions half. And despite being down to 13 men, it was the Cell C Sharks who scored first during this period, the attack being stopped illegally and Bosch adding the three to extend the lead to 15 points.

The Lions weren’t taking the battle lying down and hit back almost immediately, scoring from sustained pressure and with the conversion were eight points behind with 25 minutes of the game remaining.

But there was no stopping the Cell C Sharks, opting to send a kickable penalty to the corner and an excellent lineout maul got Kerron van Vuuren over the line for the bonus point try. Bosch added the two for a 34-19 lead going into the final quarter.

The Lions scored their bonus point try in the final act of play, and adding the conversion, finished the battle on top, but had lost the war.