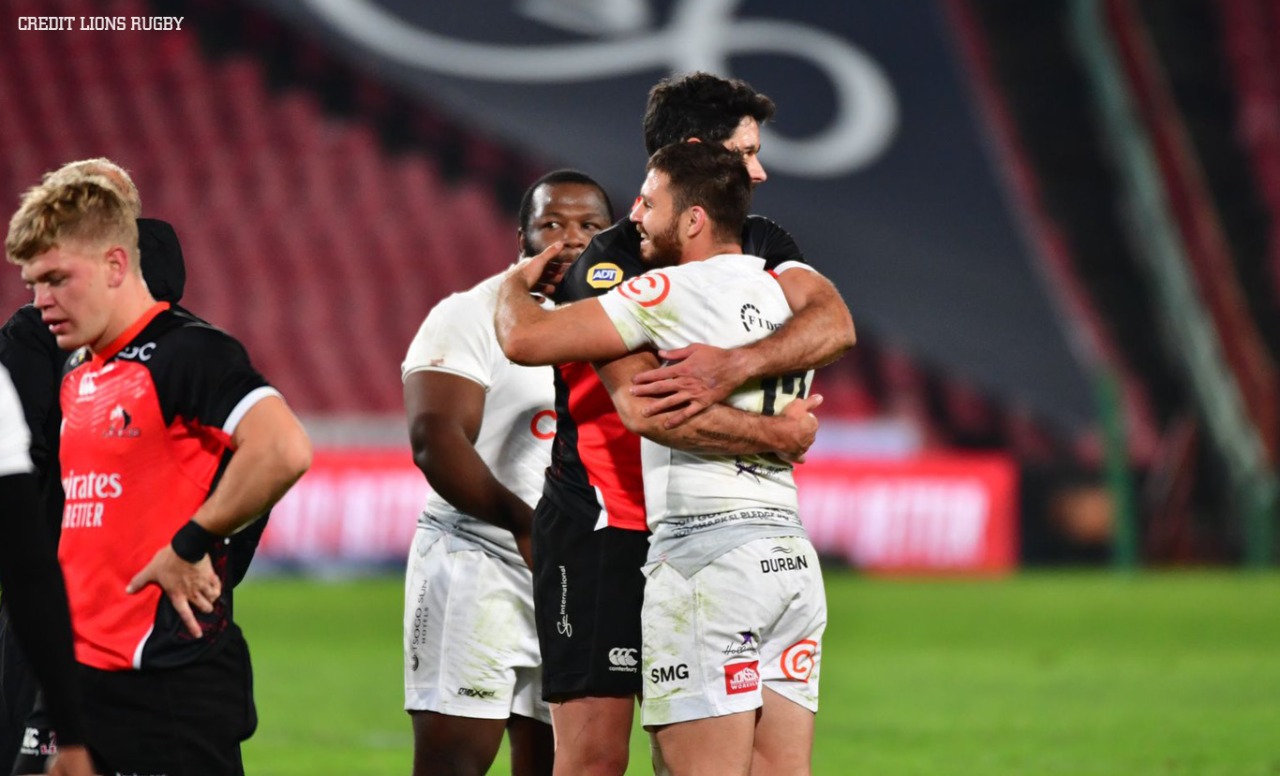 The Rainbow Cup SA competition is hotting up as the final round approaches after the Cell C Sharks scored a vital 33-21 victory over the Emirates Lions to keep their title aspirations alive.

Needing 10 points from their final two matches, the Cell C Sharks are halfway there after their bonus point victory at Emirates Airline Park. They trail the Vodacom Bulls by four log points with the two teams meeting in an unofficial final next weekend at Jonsson Kings Park to determine who finishes off as the local champions.

The forwards stepped up to the challenge and delivered a near-perfect performance in the scrums, the lineouts in particular and when it mattered, they mauled the ball over the tryline.

After a helter-skelter start to the game with both teams opting to play at a high tempo, the Lions built up a period of pressure that eventually culminated in a try after the Cell C Sharks were forced to defend their line for six or seven difficult minutes.

The Cell C Sharks struck back almost immediately, sending a penalty into the corner and then the forwards executing the maul try perfectly with hooker Kerron van Vuuren directing matters from the back to score and Manie Libbok equalising from out wide.

The Durbanites grew in confidence and reversed the stats on territory and possession that had favoured the home side and by the half hour, a TMO-referred try was denied, but penalty advantage saw the lineout and maul option taken to good effect with van Vuuren once more the man in possession as the Cell C Sharks took a 12-7 lead.

The third try was something sensational as Makazole Mapimpi made a great break, fed Jaden Hendrikse who drew the defence and with patience and verve, offloaded to Phepsi Buthelezi who strolled over under the posts handing Libbok the simplest of conversions for a 19-7 lead.

Five minutes of extra time saw the home side score their second try as they hammered away at the tryline and with the conversion, it was a five point game as the teams headed for the change-rooms.

It was an ending the Cell C Sharks wouldn’t have enjoyed, but the second half burst into action right from the start and Mapimpi showed why he’s the first Springbok to score a try in a Rugby World Cup Final as his blistering pace took him right through the Lions’ defence following a long period of dominance, but more importantly, real patience to set up the opportunity for the bonus point try, converted by Libbok for a 26-14 lead.

It was game on when the Lions managed to drive over from a lineout maul in the 55thminute of what was turning out to be an extraordinary game, a highly-contested one at that. It was a five point game after the successful conversion which just added to the tension.

But if the Lions thought they were back in the game, some individual kicking brilliance from Boeta Chamberlain saw him chip over the defence and regather the ball before sending Volmink into space to score an important try and with the conversion and eight minutes remaining, the Cell C Sharks led 33-21.