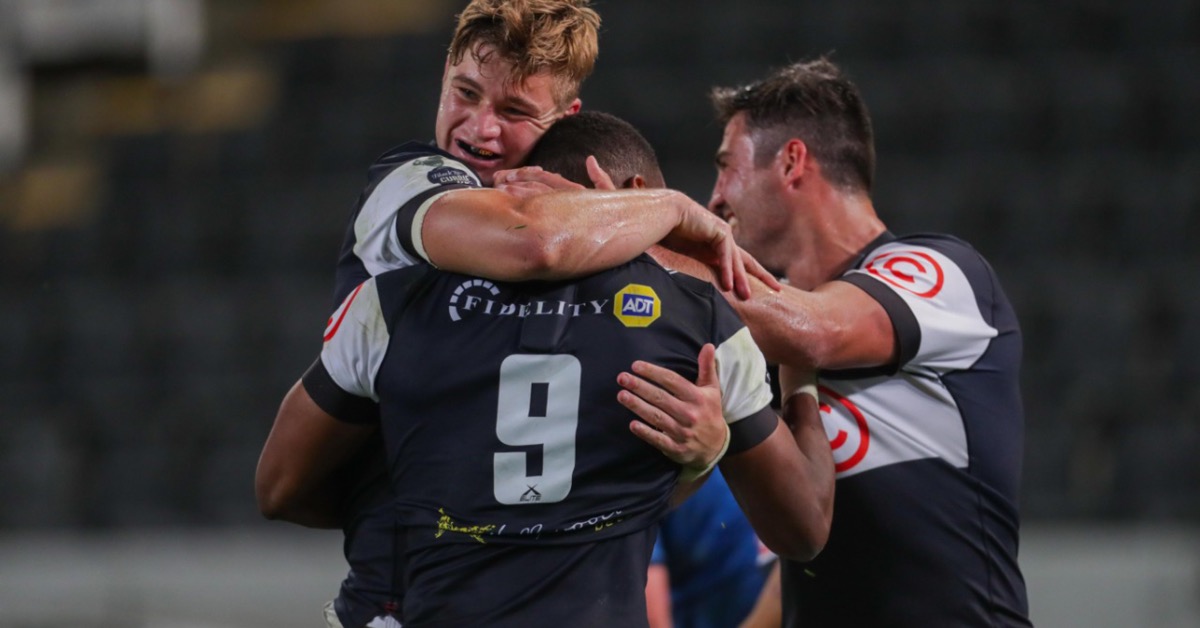 The Cell C Sharks had to weather a first half onslaught from the Vodacom Blue Bulls before a wonderful second half effort led to a well-deserved 35-28 Carling Currie Cup victory at Jonsson Kings Park on Friday evening.

There was a big ask for the home side, but they delivered in spectacular fashion to earn the bonus point win that took them to the top of the log after building confidence and holding out for a superb result that speaks of the bravery of this young team and the tempo that blew the visitors away when it really mattered.

Under pressure from the kick-off, the Cell C Sharks were forced to defend and eventually conceded the opening try inside the first five minutes, the visitors relentless on attack before scoring a seven-pointer.

The Cell C Sharks had the perfect reply, a strong scrum setting up Grant Williams for an amazing break before Le Roux Roets was fed the ball and the powerful lock was too strong for four defenders as he equalised five minutes later with the Lionel Cronje conversion.

After missing an earlier penalty, the Bulls converted a second to take a three point lead on the quarter hour only to concede a penalty at the kick-off with Cronje making no mistake to restore the draw.

The two sides hammered away at each other and with the unseasonal rain making things difficult, initially both made mistakes but it was the Bulls who enjoyed some continuity on attack to score a TMO-confirmed try for a seven point lead on the half hour.

The Cell C Sharks were under a warning for repeated infringements and Dylan Richardson was the unfortunate soul to earn the referee’s ire and he would spend the remainder of the half in the sin bin with the Bulls converting a penalty to take a 10 point lead moments later.

Lionel Cronje reduced the deficit with a well-taken penalty from 40m out and they did extremely well to resist a late effort from the visitors with a strong effort on defence to repel a final push to head to the change-rooms with a 20-13 half-time score.

Williams showed why he’s so dangerous with a lovely break early in the second half, setting his team up beautifully, but for some strong defence, although the referee ruled it cynical and the Bulls were reduced to 14 men.

From the resulting penalty, the ball was sent to the line and a lovely maul saw Kerron van Vuuren scoring the second try, well converted by Cronje to set up an intriguing final half hour with the scores tied on 20-apiece.

The Bulls gave away two penalties in quick succession for the Cell C Sharks to kick their way close to the visitors’ tryline and following another successful lineout maul, a set move saw Williams combine perfectly with Thaakir Abrahams for the scrumhalf to score a well-deserved try to take the lead.

Their confidence high, the best play of the game saw Murray Koster scoring the bonus point try after some special play featuring captain Phepsi Buthelezi and the Cronje conversion took the Cell C Sharks into a 12 point lead with the final quarter remaining.

With 10 minutes left on the clock, Cronje extended the lead to 15 points with a penalty following some excellent work from replacement scrumhalf Sanele Nohamba who stole the ball in the tackle to turn the Bulls and pressure them into conceding the penalty that took them two scores out.

With two minutes of this exciting game remaining, the Bulls managed a late consolation try, but with the missed conversion, were 10 points behind and not only was the win impossible, but they were also heading for no bonus points either.

With time up on the clock, the Bulls had a penalty that offered the chance to convert for a single, losing bonus point, or to attack the line and attempt a double – four tries and a loss by seven points.

In the end, they went for posts to take a losing bonus point back to Pretoria.