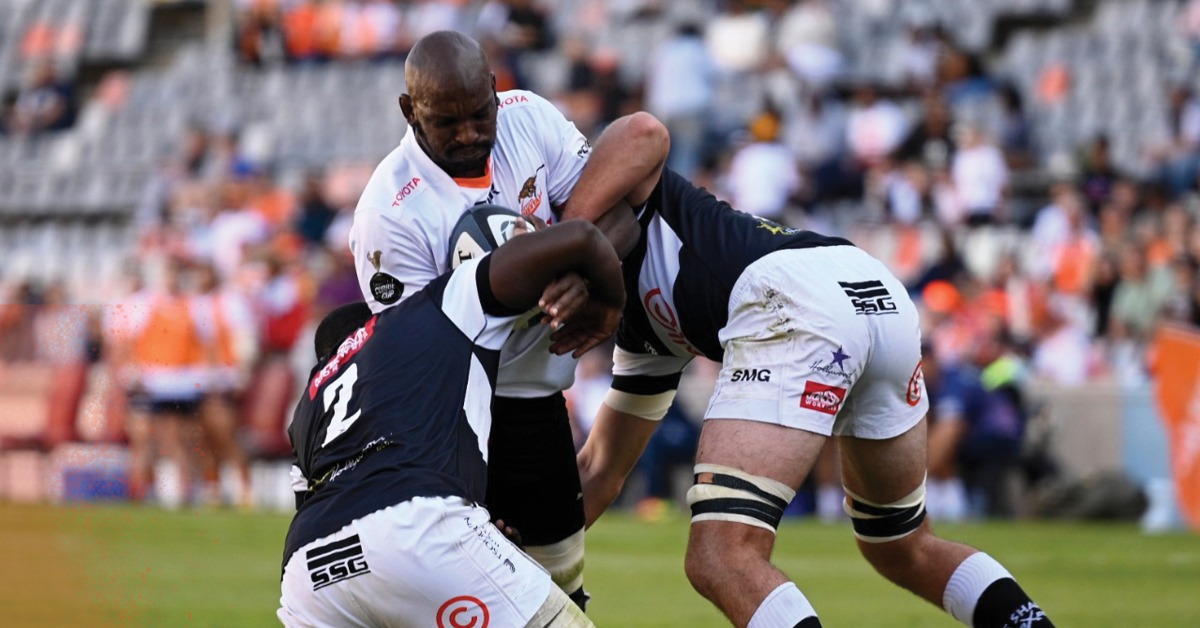 Toyota Free State remain unbeaten in this year’s Carling Currie Cup following their 44-15 victory over the Cell C Sharks in Bloemfontein on Saturday.

Throwing all their player resources into the competition, the Cheetahs have yet to taste defeat in the tournament and continue their march towards the knock-outs playing a high tempo style of rugby that has served them well.

Free State struck early, taking the ball through more than 10 phases as they showed patience on attack, starting in their 22 and eventually stretching the defence to find the gap to set up the first try of the game inside the opening five minutes.

Boeta Chamberlain succeeded with a penalty to open the Cell C Sharks’ account after a good build-up when they had enjoyed their first period of sustained attack, but Free State struck almost immediately, a high-paced attack out wide making explosive metres before the home side had their second try. The missed conversion meant they held a 12-3 lead inside the first 15 minutes.

While Free State had spread the ball out wide numerous times, the Cell C Sharks hadn’t yet had the opportunity to get the ball to the wings, but when they did for the first time, they enjoyed success, Hyron Andrews combining well with captain Jeremy Ward who did all the hard work and then fed Cameron Wright to saunter over, with Chamberlain adding the two to cut the lead down to just two points.

The home side camped in the Cell C Sharks 22 for a good 10 minutes but could not penetrate some excellent defence and lost possession in the final pass on numerous occasions, but relentless pressure eventually told as they sent the ball out wide to get over for their third try just shy of the half hour mark, although the touchline conversion went wide.

Another relentless effort from the Cheetahs earned them the bonus point try a full minute after the clock had signalled half-time and the conversion took them into a 24-10 lead at the break.

The Cell C Sharks pushed hard to score first in the second half and put together a strong effort, but couldn’t turn possession into points, before the home side struck, sending the ball across the width of the field to score their fifth try of the match, Ruan Pienaar converting for a 31-10 lead.

Dan Jooste, on for the injured Fez Mbatha, scored the Cell C Sharks’ second try after Free State were reduced to 14 men for dangerous play in the lineout, and from the subsequent lineout in the 22, Jooste was mauled over.

Taking advantage of the opportunity to run the clock down while they were a man down, Free State sent a penalty through the posts instead of their earlier tactic of kicking to touch and took their lead to 34-15 with the final quarter left to play and then added a further three points with 10 minutes to go.

A maul try with five minutes remaining and the successful conversion took them 44-15 ahead and although there was a rearguard effort in the end from the Cell C Sharks, Free State managed to hold out.

A disappointed captain Jeremy Ward said afterwards, “The result was definitely not what we came here for, we were let down by our slow start but composed ourselves well and got back into the game, but their try before half time was the real kicker.

“We let ourselves down with our one-on-one tackles, the Cheetahs are a quality outfit and they’re always going to be tough to compete against when they have ball.

“We have a lot of work to do, it’s getting quite tight on the log now and we need to put in some shift and get into a knock-out position.”

Free State’s victory took them to the top of the Currie Cup log while they await the result of the Vodacom Blue Bulls’ match against the Sigma Lions and with fourth-placed Windhoek Lager Griquas enjoying a bye this weekend, the Cell C Sharks hold on to their third place on the log.