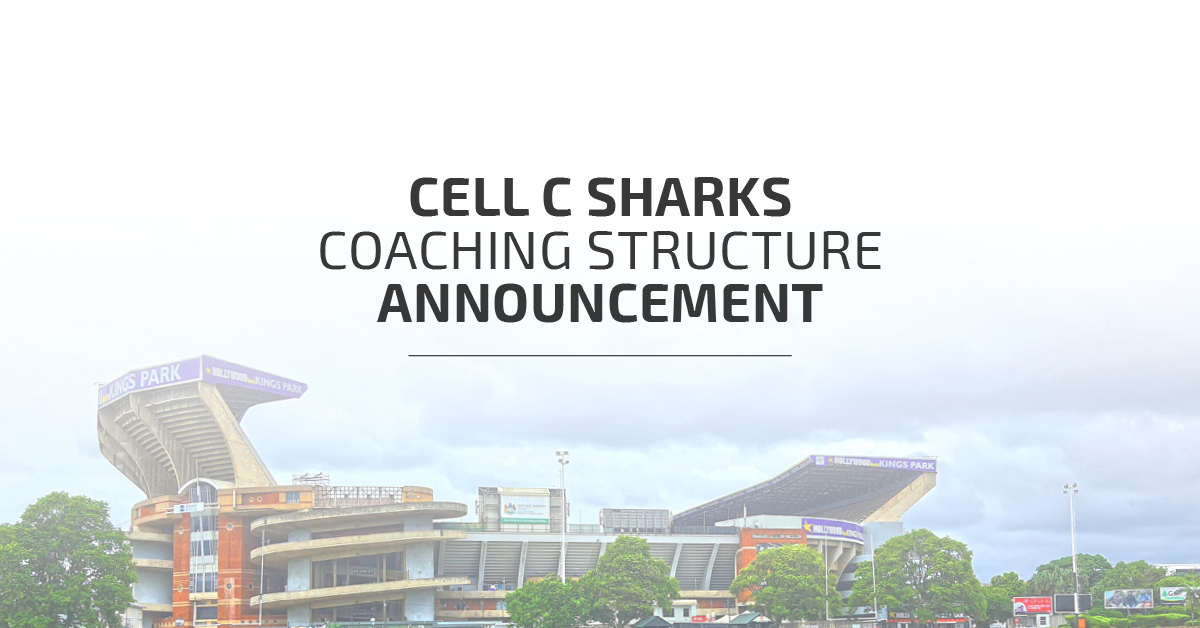 Durban, 03 July 2022: It’s the dawn of a new era at The Sharks, with the appointment of the globally respected Neil Powell as Director of Rugby and the announcement of our new coaching structure for the 2022/2023 season.

“Neil will be at the helm, to develop and oversee all rugby structures within the Cell C Sharks and to ensure that our teams are aligned in terms of the identified coaching DNA. He will implement and manage an effective plan to achieve the franchise’s objectives, which is ultimately to win trophies”, stated The Sharks CEO Dr Eduard Coetzee.

“He will oversee the Vodacom United Rugby Championship, as well as our first foray in the Heineken Champions Cup. As a globally respected and admired coach, we are confident that he will get the best out of players and brings a winning mindset to The Sharks.”

“Neil’s immediate focus and commitment over the next few months will be on the Blitzboks preparation for the Sevens World Cup in September and as proud South Africans, we wish him and the team much success. We look forward to him joining us before the start of the 2022/2023 VURC season starting in September.”

Although we made the playoffs of the Vodacom United Rugby Championship and qualified for the Heineken Champions Cup, we want to be even more competitive. A strong foundation has been laid, and the time has come for us to build from this.

We have assembled a formidable and committed group of current and new coaches, spearheaded by Sean Everitt, to harness the talent within this team and to take our rugby to the next level.

To this end, we are excited to confirm the appointment of Yannick Bru as the senior team’s breakdown coach for the European competitions. Bru is a former France international and a dual Heineken Cup winner with Toulouse. He has coached at the highest level, as forwards coach for France for five years and five years at Toulouse, before spending the last four years as Head Coach at Bayonne. As a coach who has worked with high profiled players and teams, he is a great addition to our coaching unit and joins us on a one-year deal with the option to renew.

The final addition to our new coaching structure is that of the highly regarded Joey Mongalo, who will work closely with our DOR, to oversee the Currie Cup competition and junior rugby at the Cell C Sharks. Mongalo’s coaching pedigree is impressive and is exactly what we need to take our rugby forward.

For the past two seasons, Mongalo has fulfilled the role of senior defence coach at the Vodacom Bulls and comes to The Sharks as a highly rated member of the coaching world. He spent nine seasons with the Emirates Lions in various coaching roles between 2011 and 2019, leading their Under 19s to silverware in 2016 and 2017 as Head Coach, and as Defence Coach or their U19s, U21s, Vodacom Cup, Currie Cup, Super Rugby (2018 finalists) and the Junior Springboks in 2016.

Dr Coetzee added, “In this upcoming season we will be participating in no less than five competitions. This means that not only is player depth important, but coaching depth too. It was therefore essential for us to get the right people involved and we have used the last 18 months to do exactly that.

“We believe that this new Cell C Sharks coaching structure will give us stability and an opportunity to fight for trophies and achieve success moving forward.”