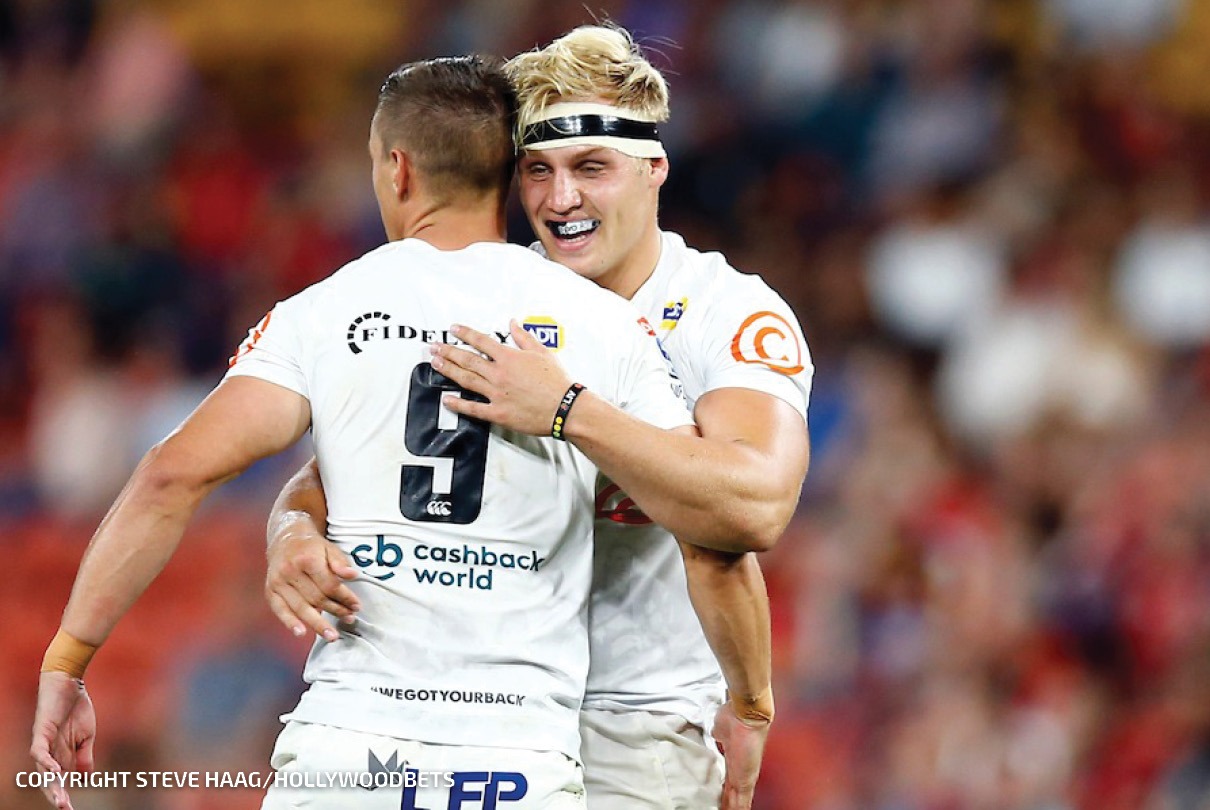 The Cell C Sharks can look back on the four week tour with a measure of satisfaction after our 33-23 Vodacom Super Rugby victory over the Reds at Suncorp Stadium in Brisbane to end with a flourish and a 75% success rate.

The four tries to three broke a five year drought of losses in Brisbane and while the first half presented difficulties, the second saw the energy, tempo and pressure raised and the Reds wilting in the heat.

The Reds put the first points on the board after the Cell C Sharks were penalised when Thomas du Toit slipped in the front row, but Curwin Bosch, the youngest South African player to reach 50 Super Rugby caps, levelled matters moments later when captain Lukhanyo Am was tackled high.

There was huge pressure to absorb as the Reds hammered away at our line but once again, defence stood up heroically before Ox Nche managed to steal possession away. Another good effort on the ground later saw a penalty kicked to touch and the rolling maul was unstoppable against the much-vaunted Reds’ pack with Kerron van Vuuren the man in possession of a 20m maul.

But the Reds hit back almost immediately with a lineout on our 22 following the kick-off. The ball was sent out to danger man Henry Speight and there was no stopping him in the corner. The conversion also went wide and the teams were deadlocked on eight points apiece after the conclusion of an exciting opening 20 minutes.

It took nearly 10 minutes for the next score, another scrum penalty to the Reds and they made no mistake adding the three points.

The remainder of the half was a stop-start affair with neither team able to put together too many attacking phases and despite a strong finish from the home side, they were unable to press home their territorial advantage, although they went into the break with a marginal, 11-8 lead.

Having sustained so much pressure without punishment seemed to have galvanised the Cell C Sharks who came out for the second half filled with energy and direction. Two good scrums set the tone before the ball was sent wide, Am made good yardage before the forwards got stuck in close to the line and then the irrepressible Dylan Richardson managed to barge over for the second try, Bosch’s conversion taking us into a 15-11 lead.

But once again the Reds struck back almost immediately, a free kick at a scrum was taken quickly with the players milling around and the score was made, although the kick went wide and it was a one point game.

With points on offer being rare, a good penalty for competing on the ground saw Bosch kick a 48m penalty to retake the lead with plenty of time on the clock and following a powerful scrum and a resultant penalty, Bosch had a similar long range effort, but this one from out wide and once more was bang on target to push the lead to five points – 21-16 with the final quarter left to play.

The Reds looked to strike back and spent endless phases in our half, but shutting them down created the pressure for a quick offload that was snatched up by Am in the interception and he sprinted downfield to score a vital try with 10 minutes of the game remaining, and with Bosch’s conversion, we held a 12 point lead.

The Reds once more had an opportunity to score but Dylan Richardson managed an important turnover, Sikhumbuzo Notshe eluded five tacklers and made glorious metres before sending Madosh Tambwe away to put the result completely out of doubt.

Quite bizarrely, the game went over eight minutes of extra time as both sides chased a final score and it looked to be all over when the Reds messed up an attacking lineout and lost the ball, but chasing the bonus point, we looked to attack from inside our 22, only for the Reds to regain possession and then score in the final act of the game.