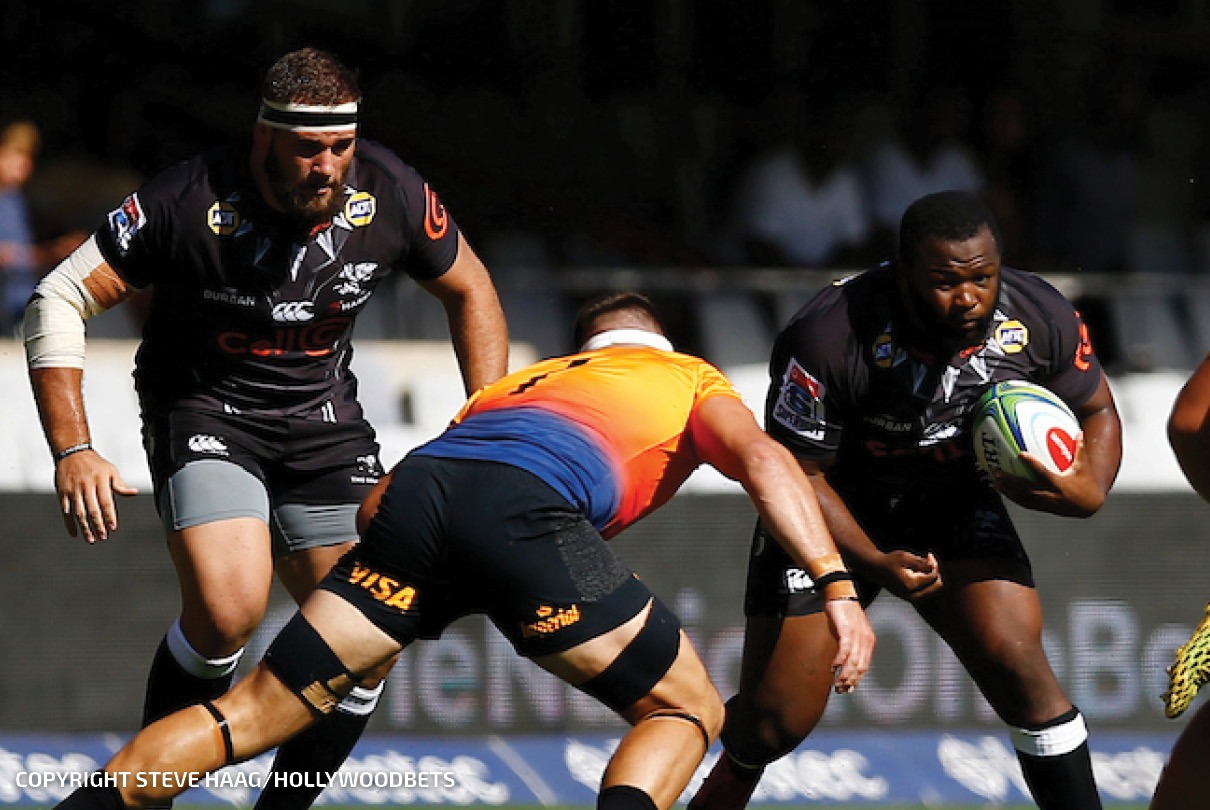 There was little to no effect of intercontinental travel as the Cell C Sharks returned from a successful tour to continue their outstanding Vodacom Super Rugby form with a pulsating 33-19 victory over the Jaguares at Jonsson Kings Park on Saturday afternoon.

Near perfect weather greeted the sides and it was the Cell C Sharks who revelled in the conditions as they swept the visiting Argentineans away in a wonderful display of dominant rugby in all facets of the game.

Four minutes in and after having dominated possession, the cell C Sharks struck first blood with Hyron Andrews showing a clean pair of heels and throwing a cheeky dummy to open space in front of him for the score. It had come following excellent work in the air off the box kick, although the swirling wind shoved the conversion wide to shave the upright.

The next minute produced quite sensational rugby and what could well have been our second try but for a TMO referral that ruled the ball had been knocked on. The ball had been sent wide with a pinpoint cross-kick from Curwin Bosch and Makazole Mapimpi had cantered in. Talk about a get out of jail free card!

The sublime followed the sensational when the Jaguares conceded a penalty at the breakdown following their scrum and the quick tap had the visitors in trouble. The hugely impressive Sikumbuzo Notshe made space for himself and sprinted away for the second – and very legitimate – try. Bosch converted and the Cell C Sharks were 12-0 up after 10 minutes.

The Cell C Sharks had obviously done their homework and the ball was being given plenty of air. It came off a treat as possession from four consecutive high balls was regained.

But the Jaguares aren’t 2019 Super Rugby finalists for nothing and they responded well in the ensuing minutes, earning a penalty, failing to drive the maul but kicking cross-field and finding the man out wide for their opening try just short of the touchline.

Within few minutes there was another scoring opportunity when the Jaguares were penalised at the maul and Bosch pushed our lead to 10 points with a well-taken 42m penalty.

Try number three started in our 22 as Aphelele Fassi received the ball and out of nothing beat off the defences and made a huge line-break before kicking ahead under pressure. The ball was recycled out wide and Andre Esterhuizen was too strong for the defence. The strike was beautiful and the lead was 22-5 inside the opening half hour.

The Jaguares scored next with less than five minutes on the clock after mauling well and taking the pick and drive option through numerous phases before finally scoring their second try, the conversion making it a 10 point game and that was how the half ended with the Cell C Sharks enjoying a 22-12 lead.

The second half started on a similarly positive note as a strong attack was thwarted, illegally so and Bosch had no problem with another long range effort to punish the Jaguares and extend the lead to 13 points.

The score kept ticking over and putting the game further and further away with another illegal act conceded by the Jaguares at the breakdown and the penalty from Bosch pushed the visitors three scores back and opened the scoring to 28-12.

The Jaguares continued to haemorrhage penalties, this time Sbu Nkosi hunting down his prey like a Cheetah and forcing the referee’s whistle in our favour. The ball was kicked to touch and a really good rolling maul took the ball over the tryline with hooker Kerron van Vuuren the man at the bottom of the pile of bodies.

With the final quarter left to play, the Jaguares, losing all kinds of battles, lost their scrumhalf to a yellow card for cynical play after his team’s scrum had been free-kicked.

Then their scrum fell apart under pressure from the Cell C Sharks and a penalised scrum was sent to the corner and the Jaguares were being reduced more and more to a defensive unit with little to no attacking opportunities being created against a Cell C Sharks side that continues to grown in confidence and delivery.

They did have a gilt-edged opportunity to score a consolation try with a four on one overlap, only to throw a forward pass in the move. With three minutes remaining, the visitors did strike a blow with a converted try, but by then it was much too late to have any effect on the outcome and they had to settle for nothing out of the game, while the Cell C Sharks went to the top of the South African Conference.