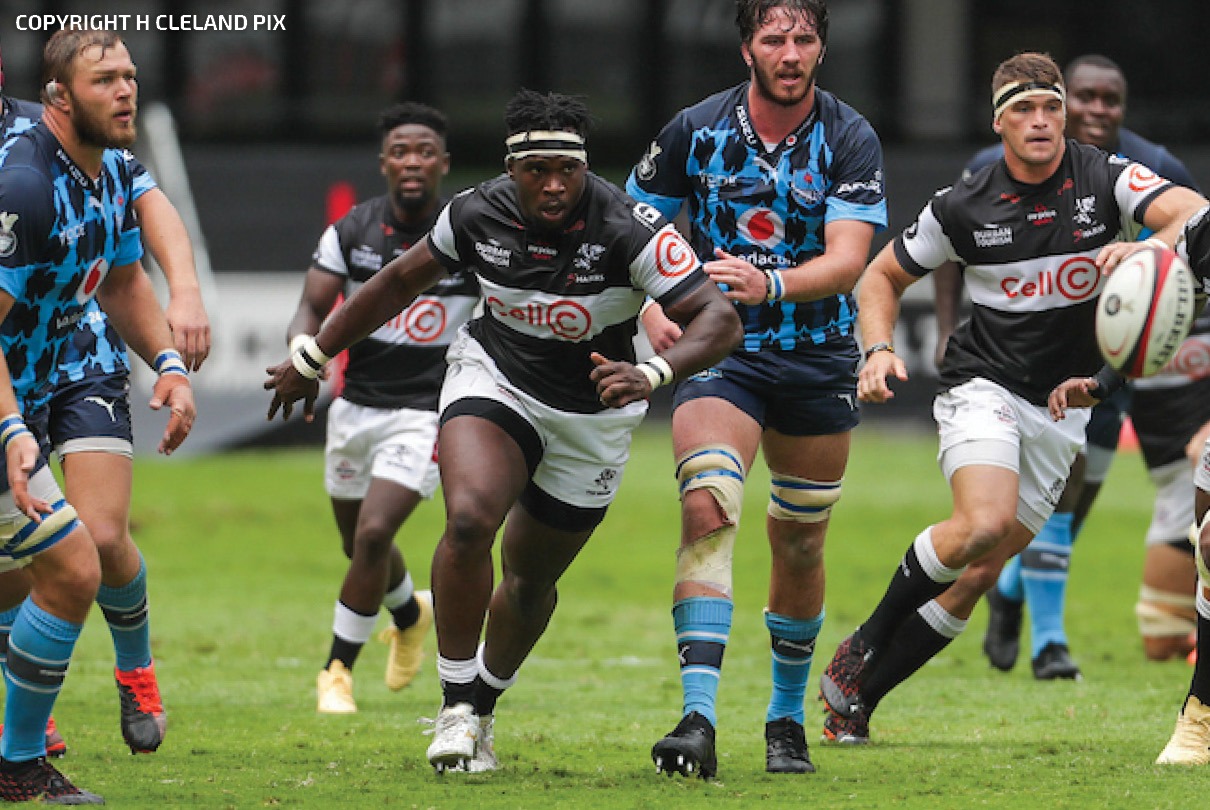 Cell C Sharks prop Michael Kumbirai had big shoes to fill replacing Thomas du Toit against the Vodacom Bulls in Saturday’s Carling Currie Cup victory, but his efforts did not go unnoticed as he performed with distinction.

“We must commend Michael, when he came onto the field his work-rate was outstanding and I thought the scrums went well on his side,” coach Sean Everitt remarked after the game.

Kumbirai began his youth career with the Bulls before moving to Western Province and the 120+ kg tighthead prop may have big shoes to fill, but on the evidence of this performance against the Bulls, this 24 year old is not out of place in the Cell C Sharks’ front row.

“I’m starting to settle in quite nicely and enjoying my time in Durban,” he says of his move from Cape Town.

He admits that running onto the field in a Black and White jersey was an experience he’s not likely to forget in a hurry. “It was my debut for the Cell C Sharks, so it was a special moment for me and to get the win was a memory I’ll never forget.”

Given that there was a lot of talk around the opposing packs and the knowledge that the Bulls would look to impose themselves physically, both at set-piece time and at the rolling mauls the fact that they didn’t quite achieve the aims they would have liked is testament to the stopping power of the Cell C Sharks forwards.

“I think we stood up to the challenge, most of it went well and while that last scrum penalty was a bit disappointing for us, we’ve put in a lot of work this week to make sure we’ll be better.”

Like many of the newer players in the squad, Kumbirai finds himself within a rugby environment that suits his style of play, being fit and mobile. Recruitment has centred around attracting good rugby people as well as those who fit the mould for the way the Cell C Sharks want to play.

He explains of his own style that, “It works well with the game plan we have here with a lot of contestable kicking and kick chasing. It’s ideal to have tight forwards who can get around the park, get into those chase lines and add to the team’s work rate.”

With a 100% success rate at home, the Cell C Sharks have lived up to the hype they have created at Jonsson Kings Park, but silverware is won on the road and with three tough weeks lying ahead, two of those away, maintaining form both in Durban and away from home is going to be vital.

“As long as we keep the same mentality going into these next few games, I’m sure we’ll be able to keep up the good record,” he points out.

“The Lions this weekend is going to be tough. We expect them to be hungry and I think it’s going to be a really good game. The Lions will definitely be up for it, they’ll be coming with a lot of tempo so we know we’re going to have to go up to Jo’burg and work really hard.”

Given his position in the coalface of the action, he acknowledges that the demands on him and his front row partners will be relentless on Saturday.

“The Lions have a really good scrum, their set-piece has been a strength of theirs and that’s going to be a great battle on Saturday.

“We do take a lot of confidence out of the Bulls game, but this is a new week and we have to wear different hats to ensure that we are 100% focussed for this game.”