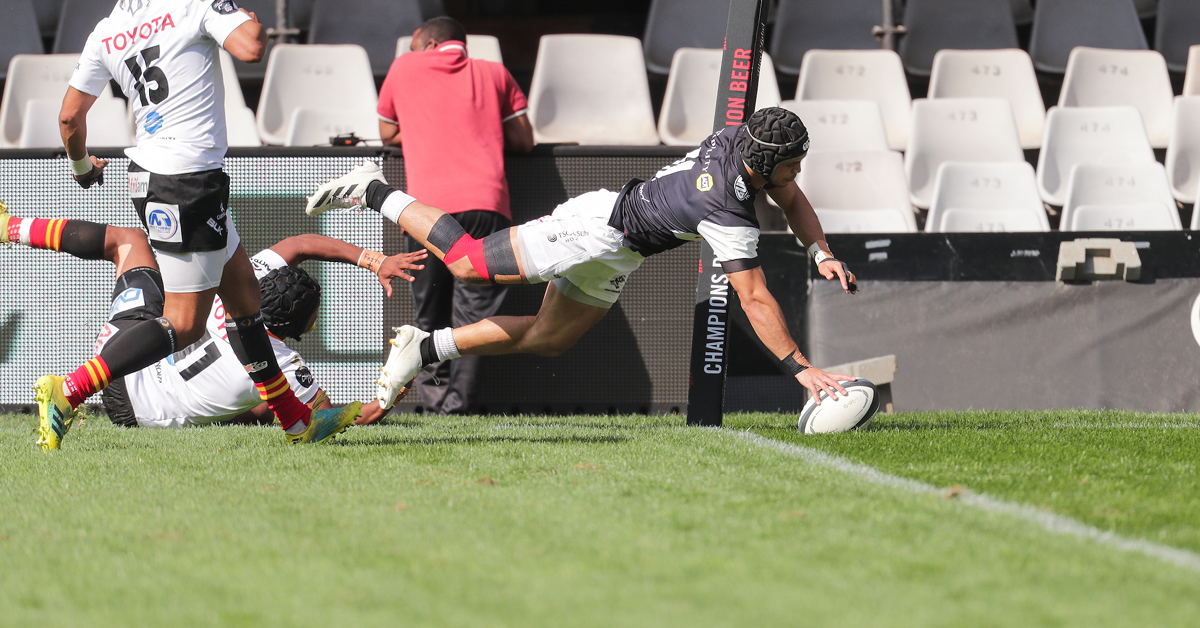 For Cell C Sharks wing Thaakir Abrahams, this is a Carling Currie Cup to savour and his try-scoring exploits are becoming more and more exciting as the tournament progresses.

He may not be the biggest wing, but when it comes to heart, pace and guile, he has all the attributes – and then some, to be a dangerous threat out wide.

Rugby isn’t only about doing a job on the field, it’s also about having fun and looking forward to every day and this is a credo Abrahams lives by.

“Every week I just go out there with the aim of enjoying myself,” he admits. “I’m having a good time with the guys and even training is going well. Every day we go out there and try to enjoy ourselves and this Currie Cup is an opportunity for me to also express myself.”

He is certainly expressing his talents. He scored a memorable hat-trick in the Cell C Sharks’ 56-14 defeat of the Sigma Lions this past weekend and will look to keep up his devastating form as the competition reaches its climactic finale.

This is a man who is driven to overcome. As a visually impaired rugby player, he has that challenge to overcome as well.

“I play with contact lenses,” he confirms. “But I overcame this at a young age and I don’t see it as a struggle but rather as a challenge. Whatever has come my way, I take it as it comes.”

Although we’ve seen him playing on the wing for the Cell C Sharks, he’s equally happy playing at fullback.

“At the moment I’m quite enjoying it on the wing, I like scoring tries as well as making them, so at the moment I’m very happy out wide. But I also enjoy it at fullback.”

Being compared to Springbok wing Cheslin Kolbe is a natural result of the similarities in their size, style and abilities and it’s something he welcomes.

“He’s done really well, he’s an inspiration and certainly someone I look up to. He’s a great player, one of the best wingers and finishers in the world, so to be compared to him is quite an honour.”

Growing up he also had his role models, “I looked up to players like JP Pietersen and Bryan Habana when I was in school. They were the players in form at the time and every Saturday I’d be excited to watch them play.”

As he gets more game time and scores more tries, it’s clear that his confidence is growing in leaps and bounds. This is crucial because striking the balance between physical attributes and the right mental space is the route to success. Mental preparation is everything.

“During the week I train with different scenarios so that when it comes to the game I have experience of that from training and it gets easier for me when I’m in that position,” he explains. “On the field I just go through the same processes that I go through during the week.”

With the knock-out rounds quickly approaching and the Cell C Sharks assured of a home semi-final, it’s easy to lose sight of the immediate challenge and that’s DHL Western Province on Saturday night.

However, there is no danger of his team losing concentration he advises.

“We’re focused and we’ve been taking it game by game every week. This week our focus is on Western Province and then we’ll take it from there.”