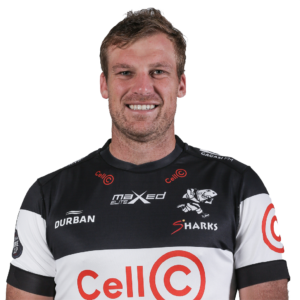 Hugo recently celebrated his Cell C Sharks debut with a sensational hat-trick of tries against the Stormers in Cape Town – at 30 years of age!

The big lock’s try-scoring exploits date back to the Varsity Cup (2013-15). The premier Varsity Rugby competition provided a platform from which Hugo, the son of former Springbok lock Neil Hugo, could launch his professional career.

Following a brief stint with the Blue Bulls (2014-15), Hugo was contracted by the Cheetahs, and was a frontline member of the side that clinched the Currie Cup in 2016.

In 2018, he was signed by Toyota Verblitz, where former World Cup-winning Bok coach Jake White steered the club to the top-three in Japan.