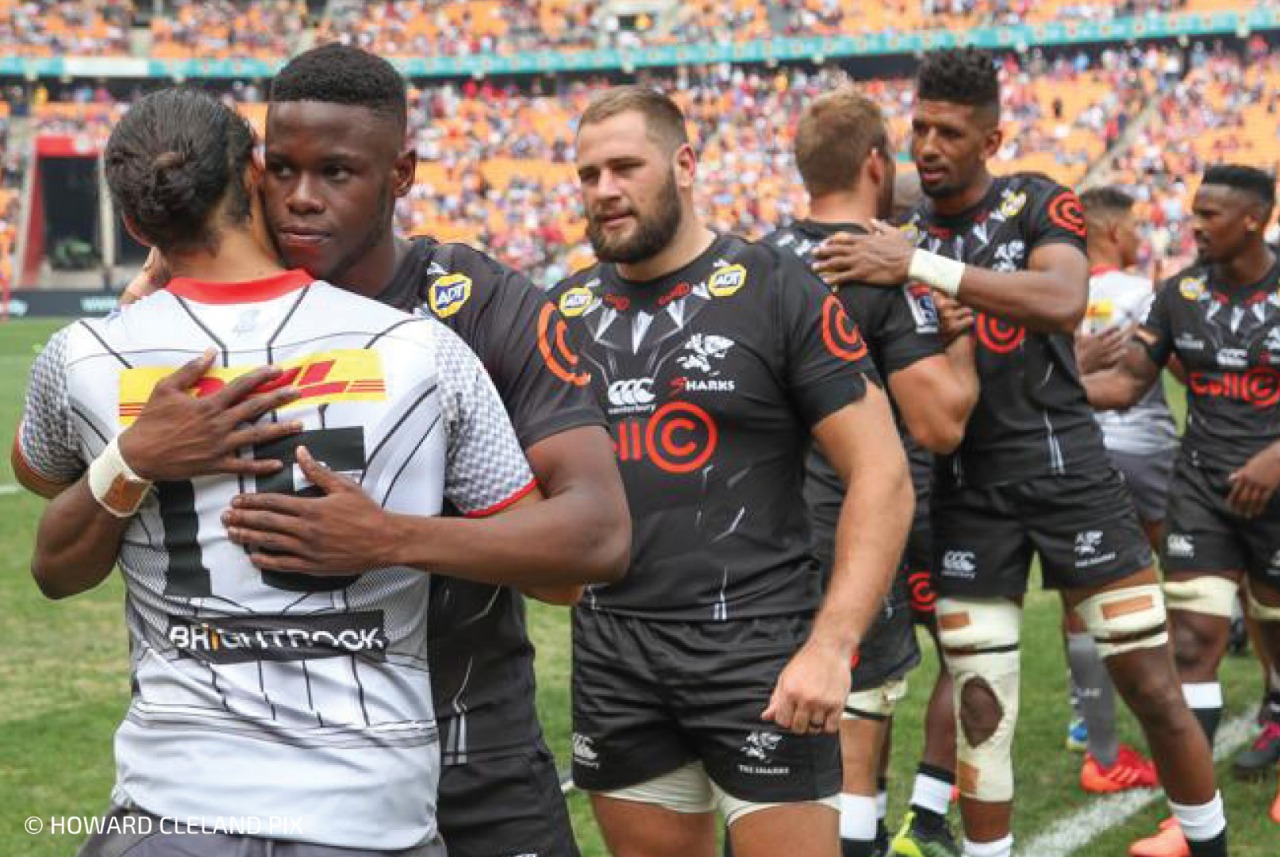 The Cell C Sharks and DHL Stormers battled it out valiantly in the first Super Hero Sunday match at FNB Stadium on Sunday, with the Cape side edging out the Durbanites 21-19.

There was great excitement and energy shown in the lead-up to this coastal derby and the match did not disappoint.

The Stormers were able to nudge the Cell C Sharks by the narrowest of margins, with both sides scoring three tries and just once conversion ultimately separating the two sides.

The Stormers enjoyed the early possession in the game but there was no penetrating some stern and accurate defence and when it came time for a Cell C Sharks attack, a powerful driving maul had the Stormers forwards in trouble.

The Cape Town side was pinned back in their 22, making numerous mistakes trying to exit and finally a strong scrum saw Sbu Nkosi receive the ball on the blindside and despite having a ton of work to do, managed to smash through. Unfortunately the referee asked for TMO confirmation of the try which was ruled marginally lost forward.

It was the Stormers who capitalised on some momentum and after failing numerous times to break through, finally managed the opening try in the 25th minute.

But within a few minutes, the Stormers had an attacking scrum on our 22 penalised when we powered them away and then quick-thinking from Louis Schreuder for the tap and run sent the ball to Lukhanyo Am who chipped ahead and it was World Cup flier Makazole Mapimpi to run on and evade two defenders to score in the corner.

At half-time there was very little between the sides, the Stormers with a conversion from in front the only advantage and the Cell C Sharks having had a try disallowed. They may have lost a legend in Beast Mtawarira, but Ox Nche certainly stepped up and his fellow forwards, stung into action by all the talk of how impressive the Stormers’ pack is, delivered wonderfully. They even managed a scrum penalty as a sign of their intent and generally there were some very good passages of play with both sides making the kinds of mistakes expected in a pre-season match.

Just four minutes into the second half Aphelele Fassi received the ball on his 10m line and somehow scythed his way to the tryline, jinxing and handing off as he ran the perfect attack. However, the referee asked for the TMO to rule on a possible infraction and the try was disallowed.

But a few minutes later the Stormers lost the ball on attack and showing patience and calm, the backs got the ball out wide and Fassi drew his man before feeding Mapimpi and he was over for his second try and the lead, the conversion taking us 12-7 ahead with half an hour remaining.

The Stormers hit back shortly thereafter with an intercept try to retake the two point lead and with 25 minutes remaining, there were wholesale changes to our side with 12 players running on to continue play after Thomas du Toit had earned a second penalty for great work at the tackle.

Unfortunately the game lost shape as it wound down and the Stormers managed to capitalise on some good possession to score their third try to take a 21-12 lead in the final 10 minutes.

But the Cell C Sharks responded immediately, Boeta Chamberlain chipping over the defence on his halfway line and Marius Louw running onto the ball and managing to carry himself, the tackler and the ball over the tryline, the conversion restoring the two point margin.

There wasn’t enough time remaining, but it was a good run for the team.

Afterwards, captain Lukhanyo Am said, “I thought it was great effort from the boys and a lot of boxes were ticked. Some errors counted against us, I thought we created a lot of opportunities and didn’t take all of them. We will work on these areas with two weeks to go to our first match in the Vodacom Super Rugby competition.”