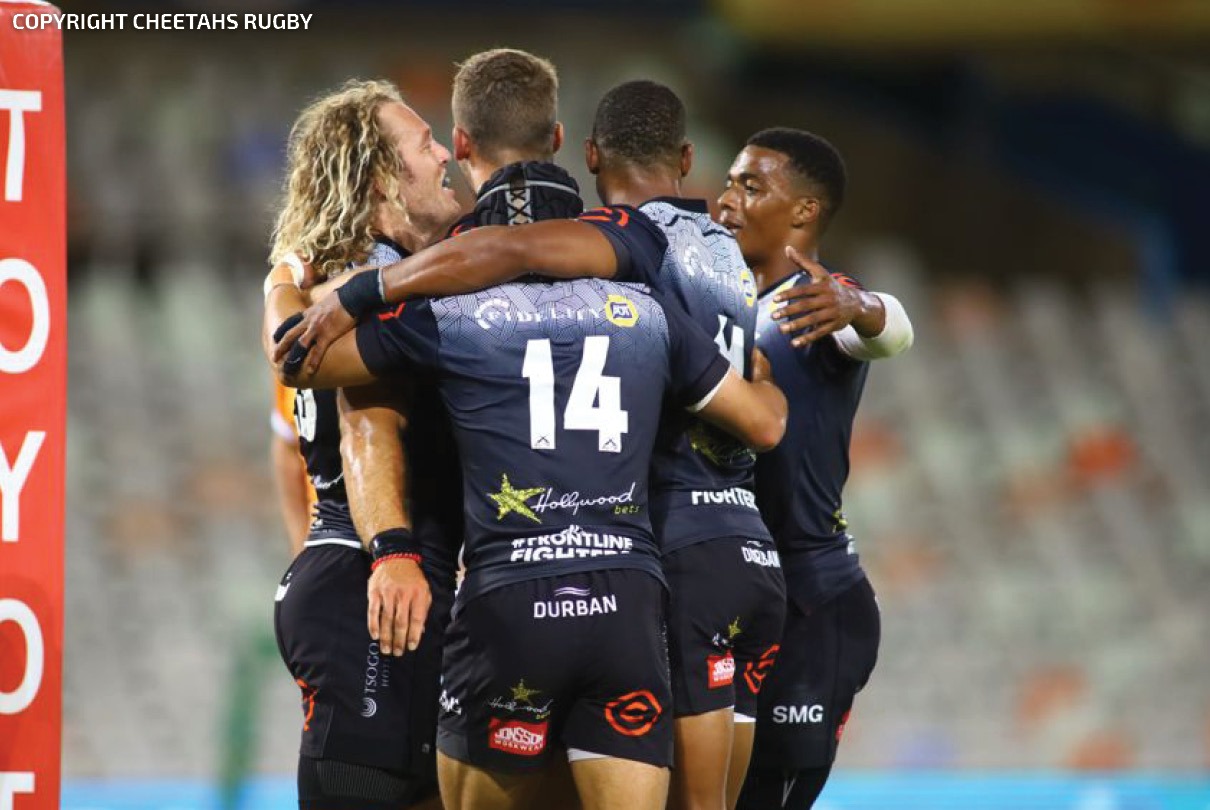 The Toyota Cheetahs had to come from behind as they snatched a 39-38 win over the Cell C Sharks in quite dramatic fashion in their preparation series match in Bloemfontein on Wednesday evening.

Despite the Cheetahs enjoying a 14 point lead at the break, a strong second half showing from the Cell C Sharks was almost enough to win the match before a last gasp penalty secured the victory.

It was commitment and high energy all the way in this action-packed clash with both sides showing their intentions to play running rugby, each contributing to an exciting spectacle of a match.

With two different sets of motivations for this match, it was nonetheless an absorbing game with both sides giving it everything. For the Cheetahs, out of Pro rugby, an opportunity to show their worth, while the Cell C Sharks continue to build squad depth ahead of the Rainbow Cup.

The opening try came off some individual brilliance, great foresight from scrumhalf Grant Williams to take a quick tap penalty and catch the opposition defence napping as he showed his blistering pace to outstrip the defenders en-route to the tryline with Jordan Chait converting.

After nearly 15 minutes of to-ing and fro-ing between the sides, both intent on breaking through some solid defence, the home side scored their second converted try.

The Cheetahs added their third try after the Cell C Sharks were reduced to 14 men following a team warning for repeated offsides as the game hit the half hour mark, Steyn adding the two from almost in front.

Showing their enthusiasm, the home team continued to play expansive rugby and were rewarded with a fourth try with five minutes of the half remaining, as their outside backs were given possession to use and they made no mistake.

The Cell C Sharks struck back almost immediately, some good work at close-quarters with the forwards showing a sense of urgency and commitment before JJ van der Mescht carried strongly with support players helping him over the tryline.

There was some excitement in the closing stages of the half as the Cell C Sharks spent time camped in the Cheetahs’ 22, but some excellent defence meant there was no change to the scoreline as they managed to hang on to a 28-12 lead at the break.

Stung by the half-time score and frustrated at not closing out at the end of the first half, the Cell C Sharks put the Cheetahs under early pressure in the second half and were rewarded with a try to the hard working Thembelani Bholi.

With just over half an hour remaining, the Cheetahs managed to get over the line as they hit back to take the score to 33-17. The scoreboard didn’t take long to change, this time Werner Kok chasing a good kick up-field and scoring his team’s fourth try, with Chait adding the two to reduce the gap to just nine points.

After winning a succession of scrum penalties, the Cell C Sharks had the Cheetahs under pressure before Phepsi Buthelezi showed his pace in scoring the converted try that took his team within two points of the hosts with a quarter hour remaining.

The scores were even at 36-apiece following a Steyn penalty for the hosts and then a try for Mpilo Gumede, before Manie Libbok added his second conversion of the game to take his team into the lead, with just two points separating the teams as the game headed for the final 10 minutes.

The tension brewed with both sides search for victory before Steyn managed to convert a long range penalty to snatch victory right at the death.